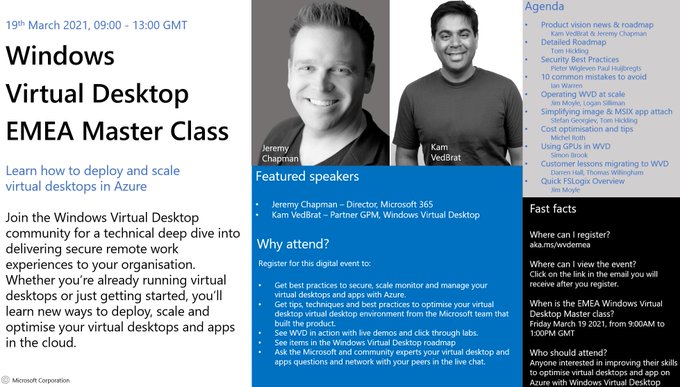 Welcome to this special WVD news of the week. This week of course with alot of news from Ignite.

Kam Vedbrat and Jeremy Chapman are organising another WVD Masterclass together with other WVD experts and community leads.

This week several update have been announced. Let’s have a look at them.

Additional features have been released in public preview for Microsoft Defender

Windows 10 multi-session is now supported for a in-place OS upgrade.

Ryan Mangan has created a MSIX App Attach Wiki page. A must check!

Ryan Mangan created a new tool that enables you to Expand MSIX’s into the MSIX image format of your choice and mount and dismount CIMFS cim images.

Migrate WVD Resources with the new Azure Resource Mover to other regions!

Patrick Köhler has written a blogpost about the feature Azure Resource Mover. HThis can be done with WVD session hosts.

Kam Vedbrat released the page with all the WVD announcements during Ignite.

John Vintzel has created a blogpost going through all the lastest news on what’s new with MSIX.

Fredrik Brattstig created a blogpost going through the new features of the new Igel version.

Issa Khoury has announced that Universal print is GA. It’s a features that can help your WVD deployment alot. The service has gone GA. Go an check it out.

Desktops in the Cloud

Christiaan Brinkhoff and Dean Cefola have released the new episode of their podcast. This time the episode goes over the 10 tip and tricks that they shared during the last WVD Masterclass.

Enhancement for WVD and Teams

Have a nice weekend and see you next week.