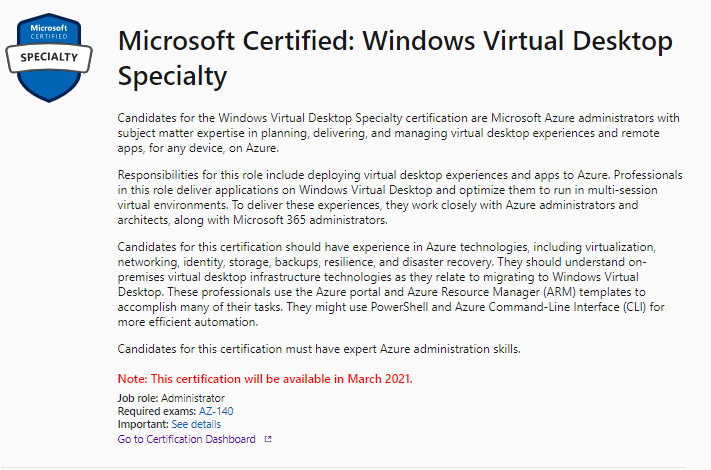 Welcome to this weeks WVD news of the week. Let’s get started because it’s a huge list this week. Enjoy all the video’s and articles and the weekend.

A new Azure security baseling has been released for WVD. This the guide on how to secure your WVD Deployment.

A big announcement on NerdioCon this week was the release of Nerdio Manager for MSP. Making it able to manage your customer in one control plane.

Stefan Georgiev has provided an overview of how DAG and remote application groups (RAG) can be used together to isolate applications in remote desktop scenarios.

How to deploy Windows 7 Enterprise with Windows Virtual Desktop

Robin Hobo has written a complete guide on how to deploy Windows 7 on WVD.

Desktops in the Cloud episode

Christiaan Brinkhoff and Dean Cefola released another episode and this week with Daniel Sol, AIB PM. There are talking about Mastering Azure Image Builder (AIB) for advanced image management.

Kam Vedbrat released a page with all the announcement thata have been made during the WVD Masterclass.

Microsoft released a page concerning the linux support for WVD.

Just before the WVD Masterclass from yesterday Microsoft has announced the upcoming WVD certification.

Spektra Systems has passed the audit and has earned the Advanced Specialization for WVD.

Citrix and WVD videos from Citrix

Rob Beekmans and Thomas Berger released a seires of videso about citrix and WVD.

What is the benefit of using Citrix together with Microsoft’s Windows Virtual Desktop (WVD)?

Wahid Saleemi has written a blogpost to compare the different scaling options for WVD.

The BWVDUG released the recording of the last meetup.

Why now is the time to consider Windows Virtual Desktop

Microwarehouse has released an article about why it’s time to consider WVD.

Stefan Georgiev released an article that explains the process to take a VM with Office installed. Offload the Office folder to a network location and use the VM as a template for all other machines in the host pool.

Simon Bender and Patrick Köhler released the first video where they interview 1 of the speakers of the WVD Techfest.