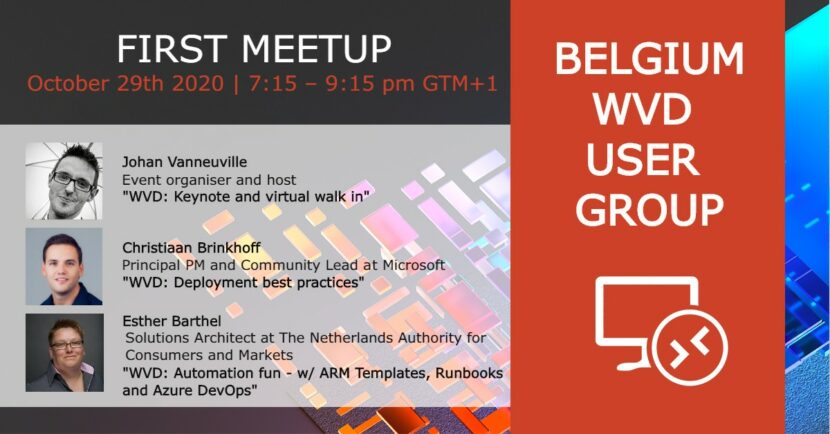 Welcome again to my weekly blogpost with all the wvd relevant news of this week. Let’s get started because it’s a logn list for this week.

The first news is from myself with the announcement of the first BWVDUG virtual event. The event is planned on 29th october. Be sure to register. Guest speakers are Christiaan Brinkhoff and Esther Barthel.

A webinar from Microsoft and NetApp has been announced for in november.

Niels Kok has written a very nice blogpost about a script which initiates a delete request for all resources in a Resource Group, I use this script for deleting WVD hostpools with Powershell.

Citrix and Microsoft are organizing a webinar series. See for all the details in the link below.

Dean Cefola from the Azure Academy released a new video about DR planning with WVD.

Travis Roberts aka Ciraltos has created a UDemy course to start with WVD.

How to fix the borderless window “problem” in Windows Virtual Desktop

Robin Hobo has written a blogpost to solve the borderless window issue.

HTG announced that they passed the audit and achived this prestiges award from microsoft. A big congrats from them on this huge achievement.

Freek Berson announced today that Wortell has also achieved this status with a perfect score.

Marcel Meurer released a new update for WVDAdmin to administrate several session host at once.

Nerdio has a launch event for the WVD community Edition for WVD. Alle info can be found on there website.

Zane Pritkovs hosted the ANZWVDUG october meetup. You can watch the recording on Youtube.

Desktops in the cloud new episode

There we go, this coevrs all the latest wvd news, see you next week.

1 thought on “WVD news of the week”