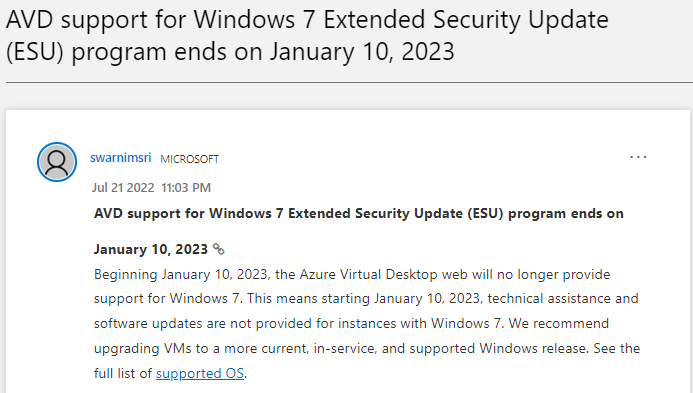 Hello and welcome to another avd news of the week, the 4th of July 2022. As usual I gathered the latest news from Microsoft and the community so let’s get started.

Microsoft has announced on techcommunity that begin january next year the support for Windows 7 ends. If you are still using this OS, start upgrading.

Microsoft announced a new hotfix for FSLogix. This one fixes a couple of issues like multi-session VHD mounting.

Another Microsoft announcement this week, scheduled agent updates is now GA. This will help alot of organizations to schedule these updates outside of business hours.

Use the Power of Azure GPU VMs with Azure Virtual Desktop

If you have missed this webinar on AVD with Azure GPU’s, you can watch it now on demand. A must watch for people who want to use those machines.

Steve Downs from Microsoft has announced another milestone for AVD. Azure Virtual Desktop received Department of Defense (DoD) Impact Level 6 (IL6) accreditation and is now available to all customers in Azure Government Secret.

Another version release for the AVD remote client. This time for the insider ring.

Tom Hickling shared the announced that storage blob won’t be supported anymore to setup your session hosts. The change will start August 22nd, 2022.

How to configure RDP properties for a Host Pool – Session behaviour

Jorge Bernhardt has written a blogpost where he explains us how to configure the session behavior tab of the RDP properties using PowerShell and Azure CLI.

New opportunities to grow your practice with Azure Virtual Desktop

Kam Vedbrat, GM for AVD posted a blog about all the features that have been released recently for AVD. He also talks about some features that are coming like AVD on Azure Stack HCI.

eG Innovations has announced a free tool that you can useto track logon performance. This will enable organizations to monitor AVD better.

Tom Hickling shared the news that customers can now use the metadata service for AVD in Japan and Australia. This is another forward of making AVD worldwide available.

Rimo3 has released a bvideo where you can see how it’s works with Nerdio for applications management. Can’t wait to test this!

Nerdio and Rimo3 have announced a collaboration between both companies. This makes application management even easier.

That’s all for this week. See you next week.